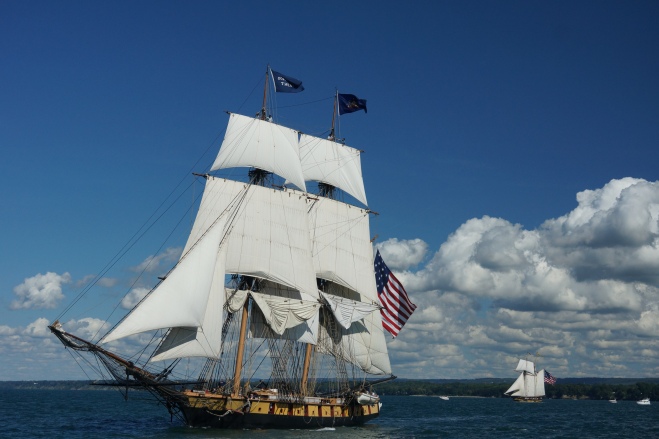 Even after Niagara docked at the Erie Maritime Museum, the voyage finished, everyone lingered. There were seabags to empty, hammocks to stow, and gear adrift (the ship’s “lost and found,” collected throughout the voyage and stashed in a huge plastic garbage bag) to sort through.

“So that’s where my phone charger went.”

Wayward possessions reclaimed, the crew sprawled out around the plaza while the assistant cook grilled burgers and hot dogs for the end-of-voyage barbeque. It was a long, lazy meal—no rush to do dishes, no scramble to finish eating in time for muster.  Even with plenty of room on the plaza, though, everyone squashed together at a few tables. Some things never changed.

Over the next twenty-four hours, trainees drifted away from the ship, lugging overstuffed duffel bags as they said their goodbyes and promised that they would come back next month or next year.

“I don’t want to leave,” one of them said, lingering in the break room while her parents waited in the car outside. “It’ll be weird, going back home.”

“Yeah, it is weird,” said one of her division-mates, a former trainee himself. “A little lonely. You’ll wake up in the morning and wonder where everyone is.”

No more predawn watches or crowded meals on the berth deck; no more climbing aloft, hurrying to sea stow before a squall; no more hunting for shipwrecks or racing ROVs. For the trainees, life aboard Niagara had been exhausting and overwhelming. Between science and sailing, there was always more work and never enough sleep. But every season, without fail, a few of the trainees who promise to come back really do return.  Some drop by for day sails, or drag their families to Erie to visit the museum.  A handful become apprentices, and some of those apprentices eventually become professional sailors.

Year after year, more than two centuries since the Battle of Lake Erie, Niagara lures her crew home.

Tho’ much is taken, much abides; and tho’
We are not now that strength which in old days
Moved earth and heaven, that which we are, we are;
One equal temper of heroic hearts,
Made weak by time and fate, but strong in will
To strive, to seek, to find, and not to yield.

The Pennsylvania Historical & Museum Commission is delaying the reopening of state-owned historic sites and museums, including The Erie Maritime Museum until further notice. With COVID-19 cases increasing across the country, we need to take every precaution possible to prevent a surge here in Pennsylvania. Please watch our website and social media for important updates.

For information on the Coronavirus (COVID-19), visit the Pennsylvania Department of Health. Thank you for your understanding and hope you all stay safe!